This is meant to be the first in the series of those thematic posts that I first envisioned writing back in the winter, shortly after we moved here. The idea is to collect some impressions about some part of our lives here that is fundamentally different than it was in the city, and try to bring them together and make some sense of them in a blog post.

Water is scarce around here. In some ways, especially at this time of the year, it is plentiful: there are numerous rivers, creeks and streams, which are all full of rushing water right now, and there are also a number of lakes. There is also snow in the winter, of course – frozen water, which, now melted, is filling up all those rivers and creeks. 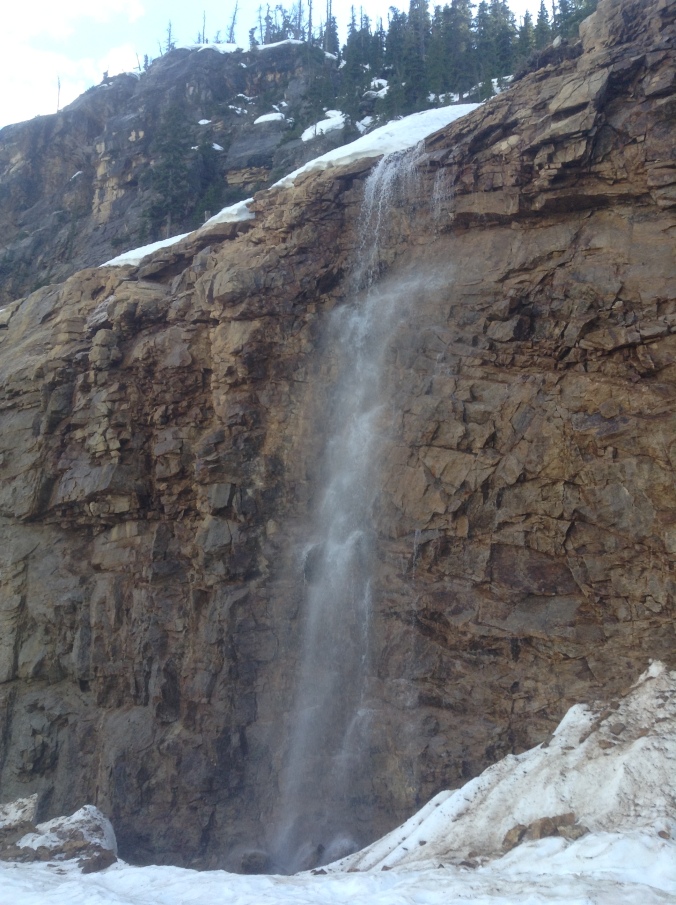 One of the many roadside waterfalls that form along the North Cascades Highway this time of year. Some of this water makes it to the rivers and streams of the Methow Valley.

Yet water is also elusive. Last year, when we were looking at some land for sale, we were told that it would be impossible to get a bank to loan us money to buy it because the property didn’t have a well on it. Apparently this is a big turn-off for the lender, the rationale being that if the new owner bought the land in order to build a home and later realized that the water supply was not going to support a residence, they were likely to abandon the property and, with it, the loan. The real estate agent also explained how some properties had better, higher-producing wells, while others had little to no water. Later, we learned that two lots could be adjacent to each other and differ vastly in terms of the amount of water that could be pumped from the ground. This is actually the case on the property where we rent our house: while the well that supplies the house is more than enough for all of our needs including watering the garden, our landlords apparently had trouble getting a good well drilled on their farmland, which sits just across the road (and, ironically, abuts a creek, which you’d think would mean there was more groundwater). 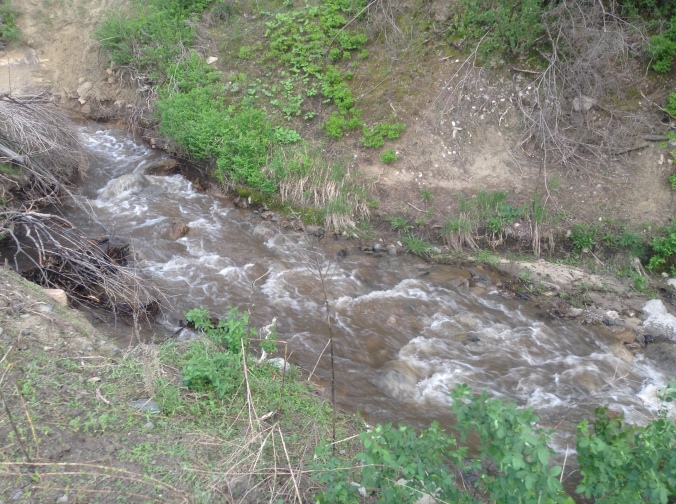 The creek that flows next to the farm where we live. It’s so full and fast right now that it’s hard to believe that it dries up in the summer.

The air does not hold much water, either. It is very dry. We noticed it within our first few days here. Heels started cracking, lips chapping, hands scaling. I was never a daily moisturizer kind of person but now I’ve become one. Well, almost; it hasn’t quite solidified into a habit yet but my skin reminds me. Even P., who has never used anything on his skin, believing that this sort of stuff is for women, has been slathering on Vitamin E oil, coconut oil, and an assortment of lotion samples that had collected dust around the house for years.

During my recent visit to a local doctor, she ran some blood tests and called back to report that my kidney labs showed that I may not be drinking enough water. I always knew that my intake of water or any sort of fluids was on the low side of what it should be, but it was never anything that would show up on a blood test. For the past few days, I’ve been making a conscious effort to sip from the chartreuse-colored, speckled enamel camping cup that sits on my desk at work and that I fill up from the bathroom tap. To be honest, I don’t really enjoy drinking water and am not a huge fan of liquids in general; I will take virtually any food that requires chewing over a bowl of soup almost any day. Treating drinking water as medicine is helping a little with this.

Similar to the air, there is not much water in the soil either. I already wrote about the wells and the groundwater. What I’m taking about now is how quickly soil that was watered dries out again, even when it’s not that hot. Our landlords asked us run a drip irrigation line in the front yard once a week, to water some shrubs they had planted last fall. One week when it rained quite a bit for a day or two we decided not to run it. When I mentioned this to our landlord, she said to run in anyway in the future because rainwater does not seep deeply enough into the ground to nourish the roots sufficiently. It’s true: it’s amazing how a grassy area or an outdoor planter will be dry again so soon after a rain or a generous watering. The one exception so far seems to be a big planter with pole beans next to the house; for whatever reason, the soil in it stays consistently damp even though A) it sits next to a south-facing wall, and B) I keep forgetting to water it. 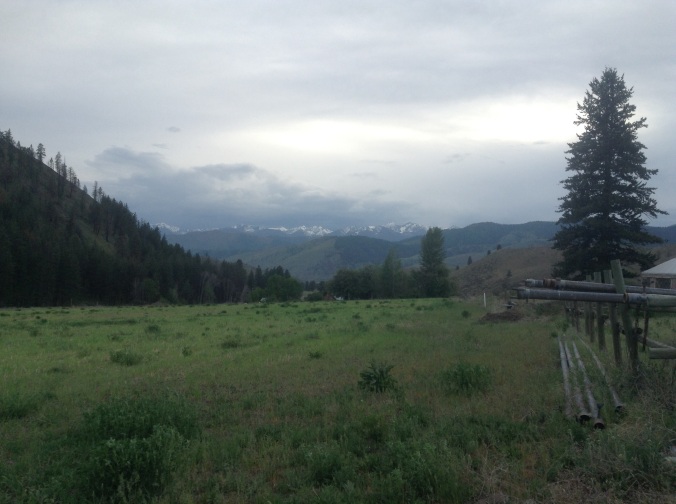 Due to irrigation system damage resulting from flooding that followed the 2014 wildfires, this farmland is now in its second season of sitting unused.

And, the water that is there? It is really hard water, very heavily mineralized. Even though all the water entering our home’s plumbing is filtered, clear glassware is covered with residue from drops that have dried. P., who is obsessed with having a spotless windshield (he is distracted by even the tiniest speck), has developed a new windshield-washing method that involves mopping it with paper towels. Indoor plants can only survive on distilled water that we purchase at the super. My hair feels different, similar to how it is after I take a dip in the ocean and then let my hair dry out. Not quite as crusty, but definitely drier and coarser than the way it was in Seattle. I’m sure some of this is due to changing shampoos; in an effort to switch to a healthier lifestyle now that we live in this beautiful environment and in a house that’s built with all natural materials, I gave up the supposedly “natural” but still full of unpronounceable chemicals shampoo and conditioner that I used to buy in favor of an all-purpose liquid soap where the only ingredients are plant-derived oils and potassium hydroxide. Some days I like the results, other days they leave a lot to be desired. Stay tuned for a future post about experiments with egg yolks, homemade yogurt and coconut oil on my hair…

So, there you go. That’s been my experience with water around these parts so far. Next up, I’m not sure… Maybe earth, especially if I get to spend more time in the garden between now and then. Maybe fire, although I hope that nothing happens that makes it a more pertinent topic than it already is. Maybe light, because there is so much of it now that the days are long, and the sun is out during the day, and most nights, as we drift off to sleep, we can see the stars and the moon overhead.