It is early July and exactly one month since we moved out of our rental and spent our first night outdoors. We are still camping, but this adventure is about to come to an end. Three days from today, we are moving into our friends’ house just outside of Twisp. They are going on a month-long road trip and asked us to house-sit for them, which mostly entails taking care of their 20-odd chickens: feeding, watering, collecting eggs, and generally making sure everyone is doing all right. I held a chicken in my arms for the first time when our friend was showing us the setup, and this apricot-colored hen felt surprisingly light, warm, and soft, and sat very still. I think I am going to like this. 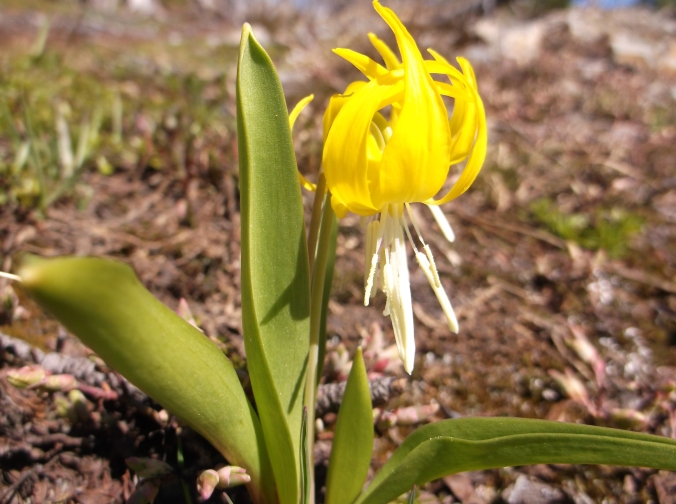 The timing is actually kind of perfect. While we will miss spending most of our time outdoors, drinking from streams, and  waking up to watch the sun come up behind the mountains and peek through the pines by 7 am, the lack of reliable internet access is starting to make our life difficult. Luckily, my workload in June was pretty light, but things are about to get busy and stay busy through this fall, so being able to spend a full workday online is becoming a necessity. P., too, misses watching some of his usual news and current events broadcasts. Currently, he is limited to just a handful of radio shows that we are able to download, as well as the one daily news program that we can download and then play offline. The worse he feels, the less he is able to do anything besides watch or listen to online shows, read an occasional short article, or browse the internet, so he, too, is looking forward to 24/7 internet.

I thought I would miss my long daily showers while camping, especially as the weather got hot, but it looks like the habits acquired during last year’s road trip kicked right back in, and I don’t mind going without for a few days, or wearing the same clothes more than once (or twice). I took one shower at a friend’s house early on in our adventure, and then used the public shower in Twisp about once a week on average. In the interim, dipping a towel in a creek and running it over my skin, or filling a gallon bottle in said creek and splashing this water, warmed up on a camp stove or out in the sun, on the smelliest parts of my body, along with a little biodegradable soap, has been an excellent way to freshen up. 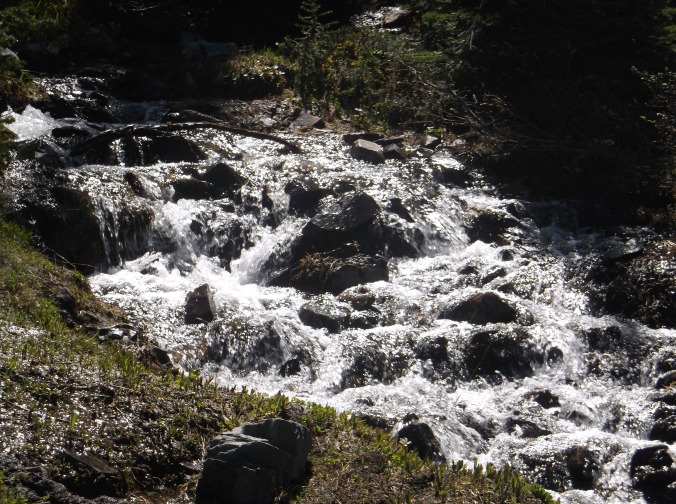 Sometimes it’s hard to believe that I, who has always valued the comforts of home, can live like this and even enjoy it. I keep thinking back to when I was around 7 or 8, and my family was renting a summer “home” – one room in a shared house for the four of us – in the country. The house had running water but the toilet was not functional for whatever reason. My parents and sister would run to the edge of the nearby forest when the urge struck, and I assume our fellow vacationers did the same. I, however, refused to pee or poop in the woods, among bugs, thorny raspberry bushes, cow pies, and small dead animals (my dad tried to get me to examine a dead hedgehog once, out of scientific curiosity, and I ran away screaming). So I insisted upon doing my business in my trusty old sky blue plastic potty, which had not seen any action in the preceding 4 or 5 years. To this day, I’m not sure how my mom disposed of the contents. Did she walk them to the forest? Wash them down the tub, which no one used for bathing because the faucet and shower just barely worked and the water was rusty? Whatever you did, thank you, mom.

It’s also been nice to have a lot fewer dishes to wash and put away, as well as simplify my kitchen routine in general. My “cupboard” currently consists of two small pots, one for boiling water for tea and one for cooking, a small cast iron skillet with a lid, two tablespoons, two teaspoons, two forks, three knives (paring, serrated, and butter), a small cutting board, a can opener, a vegetable peeler, a tea strainer, one thermos mug, one enamel mug, two small Pyrex containers, and four bowls, one of which is our dog’s. Any cooking has to be done on a one-burner camp stove. We’ve discovered that buying fuel for it is expensive when the stove is fired twice daily, day in and day out, so I’ve been finding ways to save fuel, like finally trying an alternative method for boiling eggs where the egg is just brought to a boil, then removed from heat and left to sit in the hot water, covered, for 10-20 minutes. (It works.) We’ve been buying a lot more packaged and ready to eat foods than we normally do, and my camp stove cooking is of course much more plain than at home, but it can also be a fun challenge to make something tasty out of things like Rice-a-Roni, cheddar cheese, lentils, and a jar of salsa.  (I am thinking right now that combining the four things listed above might not be a bad idea.) I’ve been making grilled cheese sandwiches with caramelized onions or sauteed chard, lentil and potato curry with egg, and, last night, Penn Cove mussels cooked in a creamy, garlicky tomato sauce (which was actually a container of Panera Bread tomato soup that was on sale at our local grocery store combined with a few cloves’ worth of chopped garlic). Of course, there has also been a fair share of ramen noodles, as well as plain boiled potatoes, dressed up with whatever was on hand. 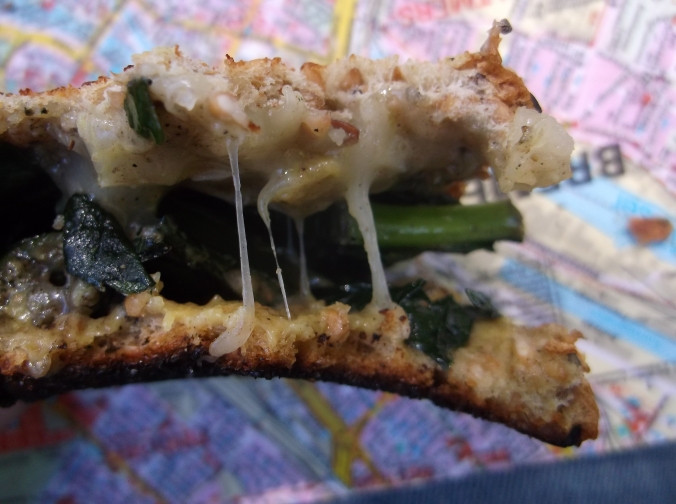 The major inconveniences of this semi-nomadic lifestyle, other than the spotty internet access that I already mentioned, have been not having a place to dispose of our garbage, resulting in the surreptitious stuffing of gas station or public park trash bins or grocery store dumpsters; the lack of an air-conditioned indoor space where the three of us, including the dog, can escape the heat; and the situation with our mail. Back when we were planning to be away until this fall, the kind folks at the post office told me that they could hold our mail through the end of September, much longer than they were actually supposed; however, the almighty postmaster overrode this decision and, in his rage, even went as far as sending all our mail that had been piling up over the course of three weeks back to the senders. Why he couldn’t at least hold it for the period that mail can be legally held for (30 days?), I’m not sure. So, we don’t even know what we received, then lost, during this time. I tried to sign up for a P.O. box, but said postmaster, who happened to be taking my application, said that a current physical address had to be listed. Our prior address was not acceptable, nor was, apparently, “Okanogan National Forest,” since proof of address such as a lease or a utility bill had to be provided. Exasperated, I asked, “So how do homeless people receive mail?” Turns out the only way is General Delivery, otherwise known as poste restante. We’ve set up forwarding from our old address to General Delivery, and should now be receiving mail again, although I haven’t gone back to check yet. I also have yet to find out whether we can receive packages via General Delivery, and what to do about anything that is shipped to us via UPS or FedEx. All of this has definitely made me think about the challenges faced by people who are truly homeless. We are fortunate enough to be without a permanent address or roof over our heads only temporarily. How difficult is the life of those who never have good internet, never have a place to dump their garbage, never have a spot to cool off in, and never have an address to list on paperwork or have packages delivered to?

And the house? The house is moving along, knock on wood. It’s a slow process that can feel especially slow when I am not consumed with work or household chores or caregiving for P. and can let my mind wander – and it inevitably wanders back to the house. The appraiser was supposed to come out yesterday to check it out but it may be almost a week until we know the outcome. While the appraisal is just one of many parts of the home-buying process and not even one for which the buyer is present, we will remember this step forever due to the light beige paint that now covers nearly everything we own, at least everything that was in our car at the time it spilled. We had to touch up the paint in preparation for the appraisal, since one of the conditions of the loan we are getting is that there cannot be any peeling paint on the inside or outside. We spent a few hours on a recent evening doing this work, then I stuck the paint tray and roller in a plastic bag and we drove to our campsite, sweaty, exhausted, and worried that, tired as we were, we must have missed a few spots. We ate a quick dinner and immediately fell asleep, only to be awakened, at the ungodly hour of 1:30 am, by some not very intelligent people who drove a couple of times past our campsite, parked in the road a couple dozen feet away from our tent, and proceeded to set off a bunch of really loud firecrackers. In our sleepy state, we thought they might be firing a gun. Without turning on a flashlight, P. stumbled towards the car to get his own gun and blindly stuck his hand in the bag with the still-wet paint tray and roller. The rest, as they say, is history. 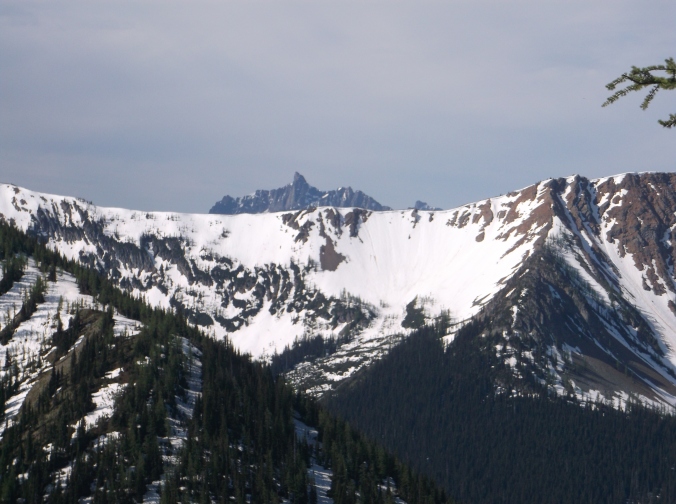 Assuming the appraisal went well, the major hurdles should be behind us soon. (I did not write anything about the inspection, the resulting back and forth, the subsequent reinspection, and the additional back and forth; that’s a story for another day, if it’s even worth recounting.) We have not yet received final word about our financing, but since we were pre-approved, our loan officer does not expect any difficulties, although he cannot guarantee anything. I’m not exactly sure when the actual loan will come through; I am guessing within a couple of weeks from when the appraisal report is turned in. There will be more papers to sign, as well as possibly checks to write. If everything works out, a month from now we will be emptying out our storage unit, loading boxes and furniture into a moving truck under the scorching August sun. Hopefully we can maintain the “early to bed, early to rise” routine that we fell into while camping during the month that we are house-sitting for our friends, meaning that we actually do this sweaty work at 8 am, before it gets hot.